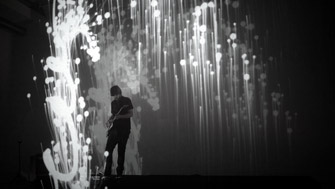 Once again I have teamed up with with my friends of Tigrelab: This time for one of my spanish clients that I know very well: Jack Daniel’s!

We did an interactive performance for the launch of Jack Daniel’s new bottle at Studio Pradillo 54, Madrid, Spain.

I did a lot of motion designs, especially light and particle works, brand visuals and several animations to be used in the audioreactive part. Pelayo and Román (welovecode) came up with the audioreactive application in openframeworks. The guitarist for the event was Christian Rey Nagel of the Pinker Tones.