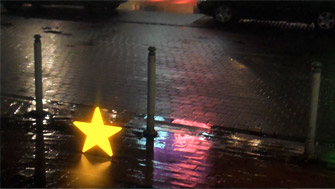 For the gala of the 1st German Webvideo Award 2011 I have created 8 trailers that integrate the award’s logo into different environments.

The short clips, filmed by Markus Hündgen with a flipcam, show locations around the venue where the gala took place on February 20th 2011.

As an intentional decision, the footage has a very poor quality (a lot of noise, bad light etc) to underline the often amateurish character of webvideo in general.

Additionally to these homemade-aesthetics, I have chosen the topic “fallen stars” for the end claim as a metaphorical deconstruction of the classical idea of admired film stars.